​The family of Chris Gilbert was forced to have a private service due to COVID earlier this year.  The family and the Chapel Hill Lions Club would like to invite everyone to attend a Celebration of Life on Saturday, July 24th, 2021 at 10am.   It seems only fitting to celebrate Chris trackside of the 46th Annual Lions Super Pull of the South.

A ticket to the Tractor Pull is not required to attend the service.

The 46th Annual “Lions Super Pull of the South” will be a special one.  The Chapel Hill Lions Club will dedicate this year’s Super Pull to two of our friends and mentors, Chris Gilbert and Jean Chrisman.

In January 2021, Mr. Chris Gilbert and Ms. Jean Chrisman passed away days apart from complications of Covid-19.  The two of them played a key role in the success of this event each year. Their dedication to this event is the reason it has been so successful year after year.

Chris Gilbert was a committed member of the Chapel Hill Lions Club. He received perfect attendance for 48 straight years. He was a recipient of the Melvin Jones Fellow Award, the highest honor awarded to a Lions Club member.  His true love was the “Super Pull of the South Truck and Tractor Pull.” Chris played an instrumental role in the Chapel Hill Lions Club creating this event 46 years ago.  For the past 44 years, he served as the chairman of the tractor pull committee, along with being the event announcer.

Chris was a major supporter of the schools in Chapel Hill, Tennessee. His love for his community and family inspired him to go above and beyond.  To many, he was known as the “Voice of the Forrest Rockets.” For many years, he and his “Crew” traveled all over the state broadcasting Forrest Rockets sporting events, including Football, Basketball, Baseball and Softball.

Chris Gilbert accomplished many things in his life, but the most important role he played in our community was friend. He loved his town and the people in it. He never helped his community for the notoriety; he just found satisfaction in helping people. He loved his family and his life partner, Jean Chrisman. He had a heart of gold and a sense of humor to match. He loved to joke and put a smile on everyone’s face. To the many lives that he touched, just know he loved each and every one of you. He was forever grateful to his customers whom he served for many years. To know Chris Gilbert was to love Chris Gilbert. He will be greatly missed.

Jean Chrisman was an honorary member of the Chapel Hill Lions Club. She was involved with the “Super Pull of the South” for many years. She worked alongside Chris Gilbert in the announcer’s box. She played a key role in keeping the pull flowing as she would communicate pull distances during the show. Jean also communicated with pull staff to make sure everything was running smoothly from the pits to the track. She was the rock in the announcer’s box and there was never any confusion when Jean was calling out instructions.

Jean Chrisman worked at First State Bank in Chapel Hill, Tennessee for 51 years. She was a member of the Church of Christ. The Chapel Hill Lions Club will truly miss Jean this year. She was a wonderful lady and will be missed by so many.
​ 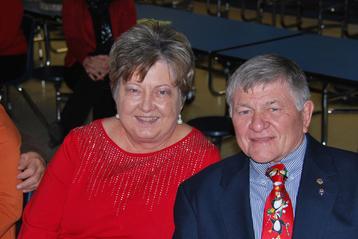